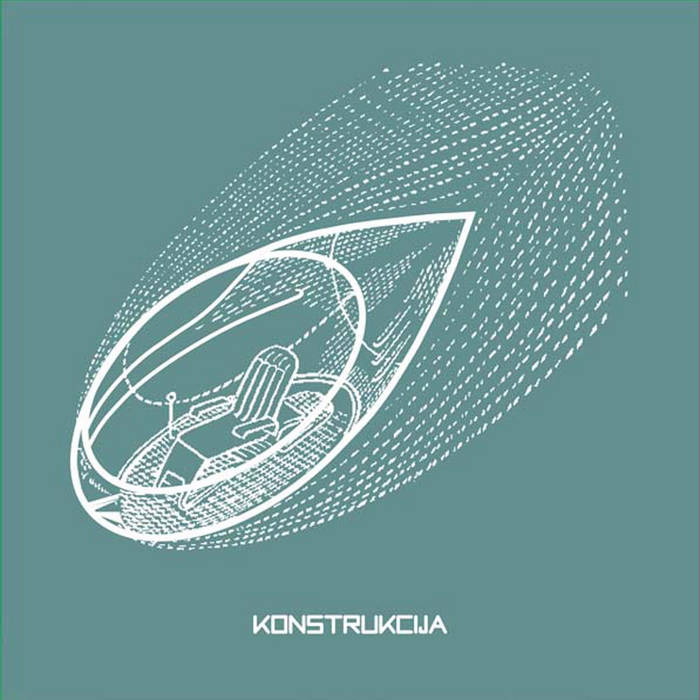 More than a side-project, Konstrukcija stemmed from the reunion of Stropu Jurka (STROPS, VSKB, but also the radio show INTERVILNIS) and Gatis Druvaskalns (STARPLIKTUVE, CELMLAUZIS) in spring 2011 when the latter returned from a two-year long stay in the Netherlands. He brought his friend back a Casio MT-40, which he had bought for the modest sum of 5 euros. They started jamming and within a few days recorded several tracks for which the Casio, a Korg Monotron, an Estradin-230 and a diy noise box were utilized. In the end they came up with a full unreleased album. The texts allude to all their friends who have left Latvia to live abroad, as well as to those who have left forever by jumping from the cable-stayed bridge (Riga).
Their sound is very reminiscent of the analogical minimal electronic wave in the vein of early pioneers such as Kraftwerk, El Aviador Dro or Yellow Magic Orchestra to which they added that indescribable Latvian frostbitten atmosphere from a country where the winter temperature may fall to -30º C and winter lasts for half of the year...
That was it officially… not until December 2012 when they started playing again in order to get prepared for a set which would be performed two months later in Paris, following an invitation from Les Sons Paranormaux. It is then that they very naturally thought of inviting Erlends Paičs –who had already been active within VSKB a few years earlier, most notoriously for a series of live sets programmed and organized by the above-mentioned organization.
During the rehearsals of the set they partly covered their older tracks while improving their quality. By then a cozy relationship had been established between LSP and Thierry Müller, and the organization dared the band to once more cover a track by Ruth which had been played by some of the members a few years earlier, and for which the original singer would come on stage during the gig. Watchwords: Polaroid/Roman/Photo… which has also been included here in its studio version.
Back home they played one more set and that was it. That was when LSP and Brouillard Definitif offered them (in 2013) to release their debut album. New tracks were recorded and added to some older ones, this is what is presented here. The design lays somewhere between Georgy Krutikov’s constructivism, the visuals held dear by post-industrial era lovers, and the Dadaist irony of the Deutsche Neue Welle.

French label founded in 2007 spreading coldwave and other unreleased projects from the 80s/90s.

Bandcamp Daily  your guide to the world of Bandcamp

Guest hosted by Tamar Osbourn aka Collocutor and Toshio Matsuura.